On a recent Instagram Poll, I asked what types of Christmas decor posts you guys want to see this year. The results were overwhelmingly clear. Budget friendly Christmas decor for different areas around the house. So armed with $40, I hit up some local thrift stores and a dollar store or two.

I have to say, the options as the thrift stores were amazing! From beautiful glass sets, (that would pair wonderfully with a iron or mirrored tray styled on a bar cart or counter top), to various styles of milk glass, blue glass, silver and crystal jars, vases and bowls. The thrift store had plenty of options that would form the base of a beautiful Christmas vignette.

However, as much as the creative juices were flowing, it was important to me that I find items that suit my style and home decor. So I honed in on a few pieces that I thought would fit nicely. 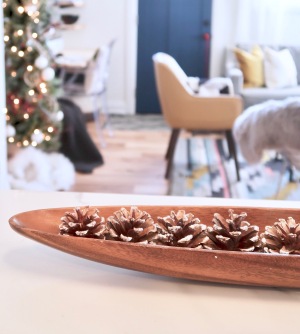 This long wooden bowl caught my eye. For $5, I knew it would be a great home for some dusted pinecones, glossy Christmas bulbs, or sprigs of berries and twigs. Sitting on my white, quartz kitchen island, the warm wood is a lovely contrast. And the white, dusted pinecones were a dollar store find. (They were arranged on a pick, so I used wire cutters to remove them from their stem.) 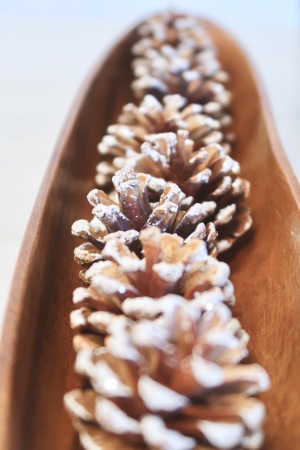 Every time I go to a thrift store, I keep my eyes open for brass candle holders. On this trip, I spotted about 4, but there were two that really caught my eye. Priced at $4 and $3, I snagged both of them, knowing they’d pair nicely with a black and brass candle holder I recently found at Walmart. 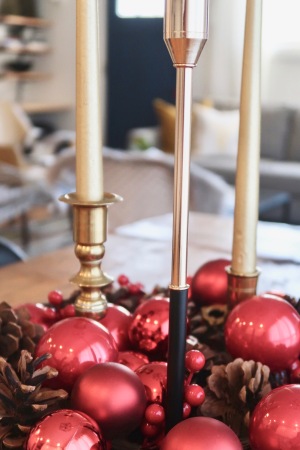 I had a bunch of pinecones that I’d gathered from a forest nearby, and some red bulbs I found at Canadian Tire on clearance a few years ago. I tossed them into the bottom of a rose gold painted concrete tray that usually lives on my coffee table, and added a garland made of red berries that I found at a dollar store in 2015.

The result was a simple, everyday kitchen table centrepiece that is easy to move when needed.

My favourite find of the day, was a copper tea kettle. The thrift store had about eight of them all lined up in a row. So I chose one that also had a touch of gold and black on it to tie in with the accents in my kitchen. (Cost of $10).

By adding in some additional greenery and berries (from the same dollar store Christmas pick that was used in the gravy boat), it adds a tiny pop of Christmas on the open shelving in the kitchen. 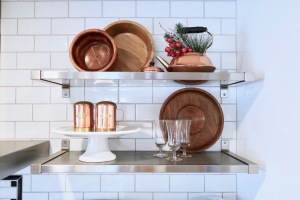 And finally, to finish off the kitchen, I added a little bit of Christmas to the kitchen counter. I always keep this black container on my counter in the event that I end up with a bouquet of  fresh flowers. It looks great as a vase, as well as sitting empty. I slipped some Christmas greenery that I already owned inside of it and this was the result. 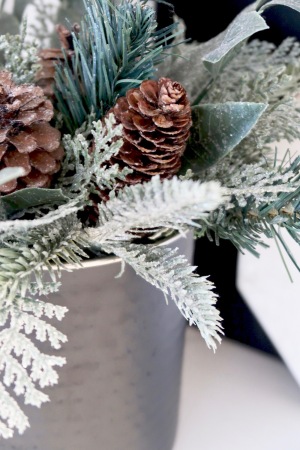 Now for the Living Room. I found an old, tarnished, silver gravy boat at the thrift store for only $6! I should have taken a before picture, because it was so filthy it was almost black! After putting it in a foil-lined pot of boiling water with vinegar and baking soda, and scrubbing it with a little bit of elbow grease, the gravy boat came out glistening.

I added a few gold bulbs, and some greenery from a Christmas pick (all from the dollar store), and a crystal and glass ornament I received as a gift a few years ago.

It’s a simple way to add a splash of Christmas to an otherwise plain bookshelf.

On my way back from the thrift store, I stopped at a couple of local dollar stores to peruse their selection of Christmas garland and picks. I’m not gonna lie, I was disappointed in this year’s selection. So I settled on some greenery and pine cone picks. These layer nicely on the top shelf in my living room. They add a nice Christmas-y touch without being too obnoxious. 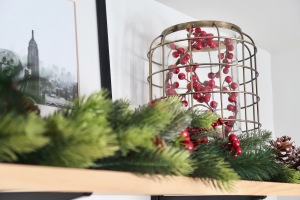 I had a second garland of berries that I bought a few years back at the dollar store, so I coiled it up and put it in the glass jar that lives atop the shelf all year ’round.

The total cost of thrift store items and dollar store greenery was $38. And using these pieces I was able to bring a little Christmas cheer to my kitchen table, and open shelves, the kitchen island, and two of the shelves on my living room bookshelf.

I also spent $15 at Home Sense and bought a large gold bowl that I used on my coffee table as a simple container for some pinecones.

I love the simplicity of pinecones and a snow globe. It adds a touch of Christmas to the living room, while still feeling like the minimally styled living room I love.

Christmas around the house on a budget complete!

Comment below and let me know if there’s any other Christmas decor posts you’d like to see! Coming up next week, I’ll share this year’s Christmas Tree. Spoiler alert, it’s mainly decorated with dollar store items…